Book Launch: Geometry and Art in the Modern Middle East

Book Launch: Geometry and Art in the Modern Middle East 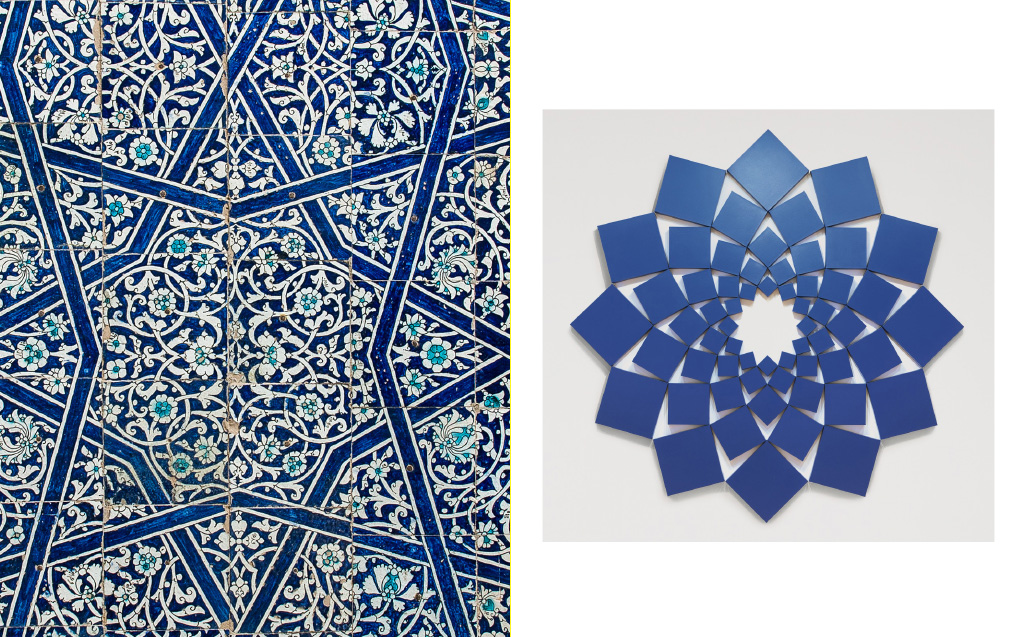 Join us for the launch of Geometry and Art in the Modern Middle East by Roxane Zand and Sussan Babaie. To mark the occasion, Zand will be in conversation with a specialist in geometry, Dr. Khaled O. Azzam, L.V.O, at 16:00.

Geometry and Art in the Modern Middle East is a groundbreaking examination of the theme of geometry in the practice of artists around the world, and especially from our region, in drawing upon their Islamic heritage, and experimenting with innovative and new directions. The universal visual language of geometry demonstrates more cultural connectivities than divisions, and the book platforms the practice of 24 artists who approach geometry from different perspectives. The book has received highly positive reviews, and the idea of “geometrists” becoming as important in the contemporary canon as calligraphists in the Middle East art scene is a theme that has attracted much debate and discussion, and which makes a fascinating topic for a panel presentation that will include one of the artists and a well-known curator.

Dr. Khaled Omar Azzam, L.V.O is the Director of the Prince’s School of Traditional Arts in London. He is an architect by training and maintains his practice through offices in Cairo and Jeddah. He has built houses, schools, mosques, offices, commercial buildings, and royal residences. These projects apply the principles of traditional Islamic design and construction techniques, acquired from academic research and practice, with the aim of establishing a contemporary expression for the architecture of the Arab/Islamic world. The integration of architecture, the arts, and education is not only seen in his architectural profession, but also in his academic career through the development of education projects, programs, and institutions.

Roxane Zand is the Senior Director and Deputy Chairman, Middle East and Gulf Region at Sot­heby’s. At Sotheby’s, she has played an instrumental role in developing and contributing to sales of Arab and Iranian art, and has conducted a number of charity auctions to benefit causes in the MENA region. Zand began a career in museum and arts administration after three years in UNESCO. She left Iran after the Revolution to resume professional activities in London in the fields of education and the arts, and as one of the founding members of the Harvard Club of London. Zand was an officer of the Iran Heritage Foundation before moving to Asia House, as well as a freelance consultant for numerous projects for the British Museum and elsewhere in the art world before joining Sotheby’s in 2006 where she is now Deputy Chairman for the Middle East. Currently, she sits on the Advisory Council of the Pictet Art Prize, the Development Board of the University of the Arts London, and has been appointed as a Deputy Lieutenant for Greater London for her services to Middle Eastern art and culture. She is also arts editor for the Encyclopedia Islamica.

Rebecca Anne Proctor is the editor-in-chief of Harper’s Bazaar Art and Harper’s Bazaar Interiors. She previously edited Villa 88, a luxury lifestyle magazine catering to the local Emirati and GCC female market. Before working at ITP, she worked on luxury lifestyle magazines in the region for six years, including T Emirates; The New York Times Style Magazine; Bloomberg Businessweek Middle East; Mojeh; Luxos, and Canvas. She has also contributed to international online lifestyle sites BBC, Artnet News, Frieze, Galerie, The Business of Fashion, Haute Time, Haute Living, Sotheby’s, The National, and Art Observed, as well as written several art catalogues. She obtained an M. Litt from Christie’s London in Modern and Contemporary Art History. While in London, she worked at Gagosian Gallery before moving to Paris to pursue a double MA in Middle Eastern Studies and Conflict Resolution from the American University of Paris and a Masters in Sociologie des Conflits from the L'Institut Catholique. Rebecca has written numerous art catalogues on Middle Eastern art and culture, and regularly moderates panels on culture and art within the region and internationally.