In English and Portuguese with English subtitles
Free admission 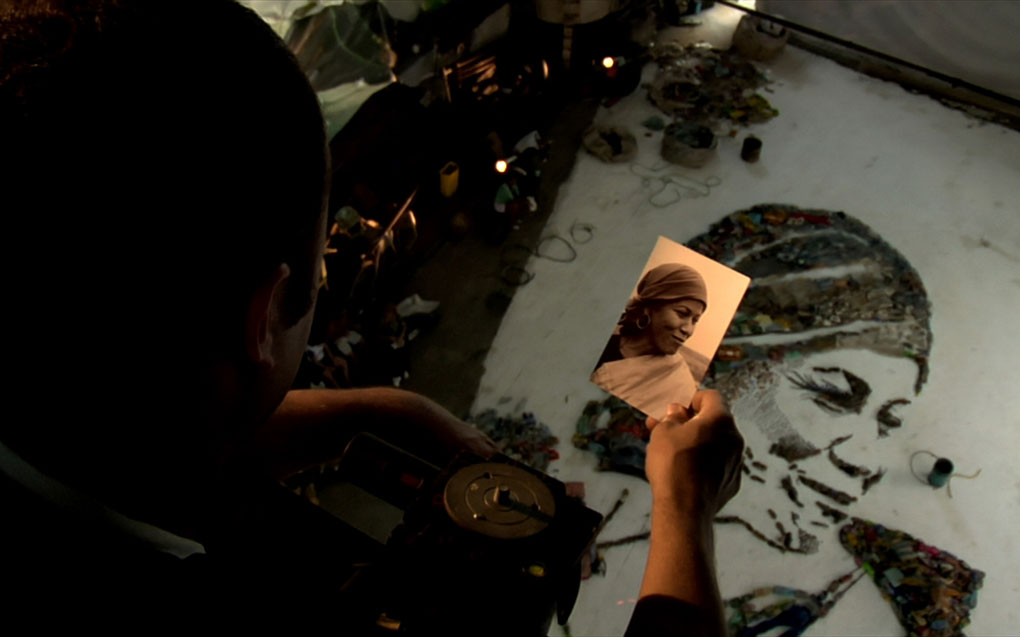 A film screening curated by writer and curator Rasha Salti, in conjunction with the exhibition Let's Talk About the Weather.

Filmed over nearly three years, Waste Land follows renowned artist Vik Muniz as he journeys from his home base in Brooklyn to his native Brazil and the world's largest garbage dump, Jardim Gramacho, located on the outskirts of Rio de Janeiro. There, he photographs an eclectic band of catadores – self-designated pickers of recyclable materials. Muniz's initial objective was to "paint" the catadores with garbage. However, his collaboration with these inspiring characters as they recreate photographic images of themselves out of garbage reveals both the dignity and despair of the catadores as they begin to reimagine their lives. Director Lucy Walker and co-directors João Jardim and Karen Harley have great access to the entire process and, in the end, offer stirring evidence of the transformative power of art and the alchemy of the human spirit.

Karen Harley has directed several short film documentaries on Brazilian artists, including Ernesto Neto in We Fishing The Time, Leonilson in With The Whole Ocean To Swim (Best Film in Rio Festival), and Marcos Chaves in Comfundo.

Rasha Salti is a curator and writer. Currently, she is an international programmer for the Toronto International Film Festival. From 2004 until 2010, she was the film programmer and creative director of ArteEast in New York. Her curated projects include: Mapping Subjectivity: Experimentation in Arab Cinema from the 1960s until Now (co-curated with Jytte Jensen), for the Museum of Modern Art, New York, 2010–2012; 10th Sharjah Biennial (co-curated with Suzanne Cotter), Sharjah, 2011; and the retrospective of Syrian cinema The Road to Damascus (co-curated with Richard Peña), for the Film Society at Lincoln Center, 2006. Her essays have appeared in publications such as Afterall, The London Review of Books, and Naqd. She collaborated with Ziad Antar on the exhibition and publication Beirut Bereft: The Architecture of the Forsaken and Map of the Derelict (2009), and edited the book Insights into Syrian Cinema: Essays and Conversations with Filmmakers (2006). Salti lives in Beirut and works in New York, Paris, and Toronto.