A Dialogue About Arab Cities Through Literature, Architecture, and Urbanism
Organized by ACA and BeK 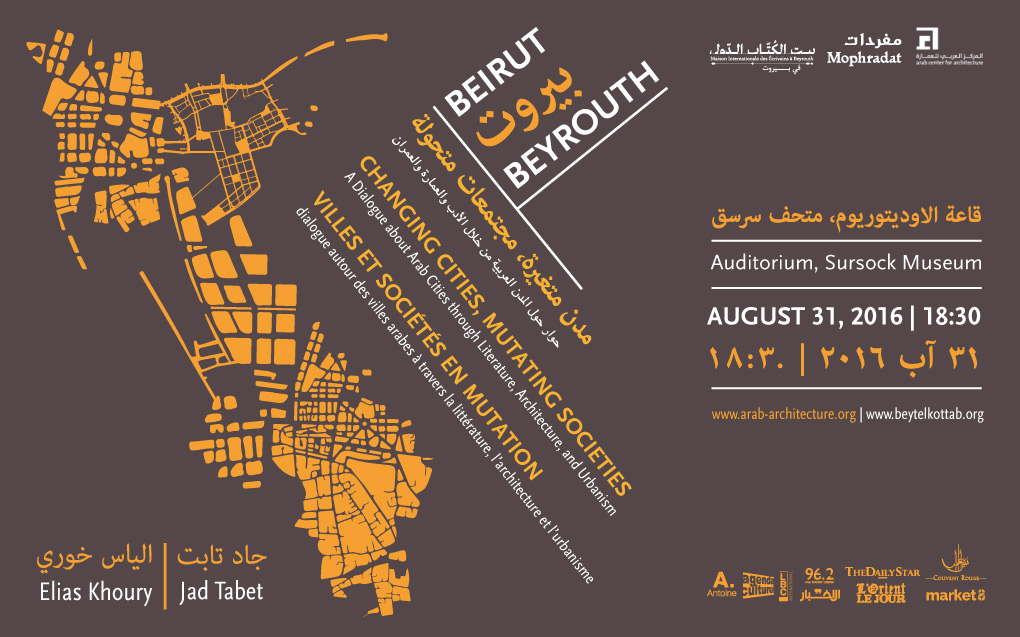 This event is organized by the Arab Center for Architecture and the International Writers’ House in Beirut (Beyt el Kottab) as part of their ongoing series of public discussions between architects, urban planners, and novelists. For this session, architect Jad Tabet and novelist Elias Khoury will discuss Beirut as a war-torn city.

The talk will include a presentation of selected visuals from Tabet and texts from Khoury that reveal various representations of Arab cities from a multidisciplinary perspective.

This project is funded by Mophradat.

Jad Tabet is an architect, urban planner, and critic practicing between Beirut and Paris. His work covers the fields of historic urban landscapes, public space design, rehabilitation and revitalization of traditional urban fabrics, social housing, and public facilities. He is member of the UNESCO World Heritage Committee and Vice President of Patrimoine Sans Frontières, an NGO based in Paris. Tabet has been appointed Distinguished Faculty at Sciences Po-Paris School of International Affairs (PSIA), and has taught at the American University of Beirut, the Lebanese University, and the School of Architecture of Paris-Belleville.

Elias Khoury (b. 1948, Beirut, Lebanon) is a novelist, literary critic, and columnist. Since 2010, he's been the editor-in-chief of the Journal of Palestine Studies, and a visiting professor at the Lebanese American University. Previously, he was the director/editor-in-chief of Mulhak, Annahar's weekly literary supplement, and the artistic director of the Theatre de Beirut. He is also a Global Distinguished Professor at New York University. His novels have been translated into fourteen languages, including English, French, German, Swedish, Italian, Norwegian, Hebrew, Dutch, Portuguese, and Farsi.