Screening: Punishment Park
With the support of the Goethe-Institut 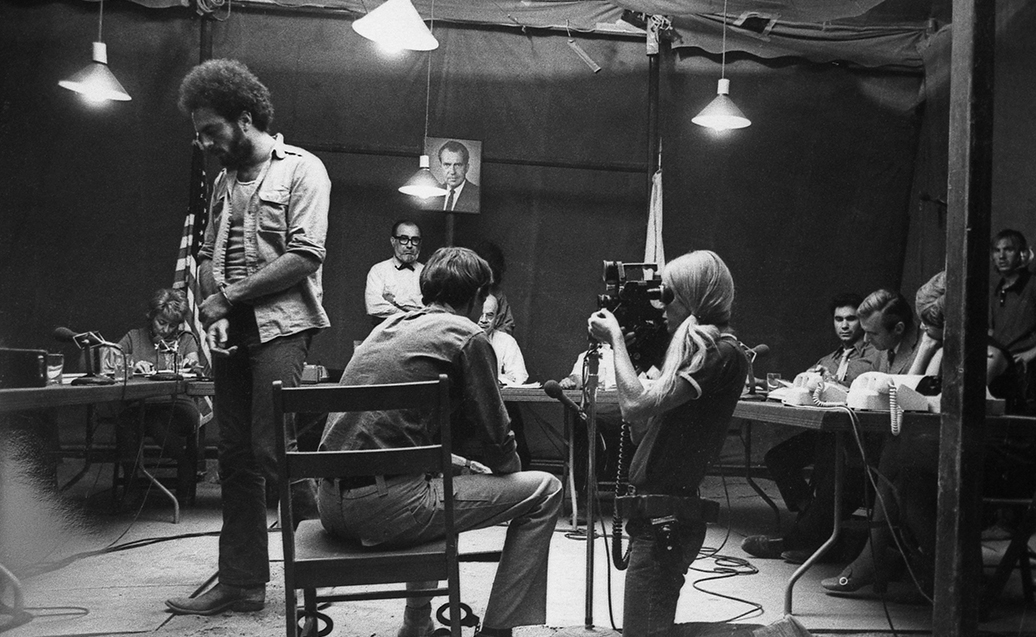 In conjunction with the exhibition FABRIK, this screening is part of a two-day program with exhibiting artists Jasmina Metwaly and Philip Rizk.

Vital to Jasmina Metwaly and Philip Rizk’s work, the screening of Peter Watkins’ Punishment Park (1971) contextualizes their practice and approach to docudrama and realism in producing the film and installation Out on the Street (2015).

“The policeman isn’t there to create disorder, the policeman is there to preserve disorder.” (Mayor Richard Baley at a press conference during brutal dispersal of anti-War demonstrators at the Convention Center in 1968)

In 1968, Peter Watkins is in Sweden and is working on The Gladiators (1969) and Richard Nixon becomes the president of the United States. The same year the North Vietnamese army launches Tet Offensive sending over 500,000 soldiers to Vietnam. A year later the Chicago Trial opens and Bobby Seale from the Black Panthers is separated from the rest of the defendants. Watkins moves with his family to America to produce a trilogy on the American Wars and on the Colonization of the Native Americans which he never finishes. In the same period he comes across the Mc Carran Act that allows for "the setting up of places of detention (in effect concentration camps) for those accused by the government of subversion, or of even considering subversion" (Peter Watkins Self-Interview on PUNISHMENT PARK, 2005). In May 1970, the National Guard opens fire on a student demonstration at Kent University in Ohio killing four protesters.

In the fall of the same year, Watkins shoots Punishment Park (1971). He chooses the Californian Mojave Desert as a location, where he builds a tent that acts as a courtroom for a group of dissidents judged by a civilian tribunal. Prisoners are given two options: spending a lengthy time in prison or running through the desert towards an American flag located 53 miles away. They get a 2 hour-start after which armed soldiers follow the group into the desert. The plot of the film constantly shifts between two locations: the testimonies given by protesters in the tent, violently confronted by the temporary panel of judges and the run across Punishment Park, brutally dispersed by the military. Like in Kent University, or inside the Chicago Trial, violence escalates leading to a 'real' confrontation between the actors; the ‘tribunals members’ and the ‘activists’, 'armed forces' and 'prisoners'.

In real life none of the sides had met before; there were no rehearsals. Actors/non-actors were given a script beforehand to work with, but the on-set experience and the verbal confrontation between them led to a more spontaneous performance. In a self-lead interview, Peter Watkins speaks about 'psychodrama' in Punishment Park, in which he came "to realize that allowing the actors - including the conservative members of the tribunal - spontaneity and freedom of expression, would not only strengthen the film, it would act as a practical demonstration of my critique against the traditional methods of the mass audiovisual media, with their rigid adherence to tightly controlled narrative structures, dialogue, and editing patterns."(Peter Watkins Self-Interview on PUNISHMENT PARK, 2005). It is within this improvised space of a tent, where the microcosms of violence manifest themselves yet again, where polarized fictions become 'truths' and the 'truths' become fictionalized.

Peter Watkins (b. 1935, Britain) began his career in advertising as an assistant producer and turned to amateur filmmaking in the late 1950s. In the mid-'60s he was commissioned by BBC-TV to make two feature-length docudramas incorporating a quasi-newsreel style and nonprofessional actors. The second of these, The War Game (1965), graphically portrayed the nightmare of nuclear war and was banned from broadcast. It was subsequently released in theaters and earned a best documentary Oscar in 1966. Watkins enjoyed modest success with the commercial feature film Privilege (1967), but has subsequently worked primarily in the documentary genre, based in various Scandinavian countries. One of his more recent films, Resan (1987), is an 873-minute (14-hour) epic that addresses such issues as the arms race and global hunger.