The Sound that Remains

The Sound that Remains 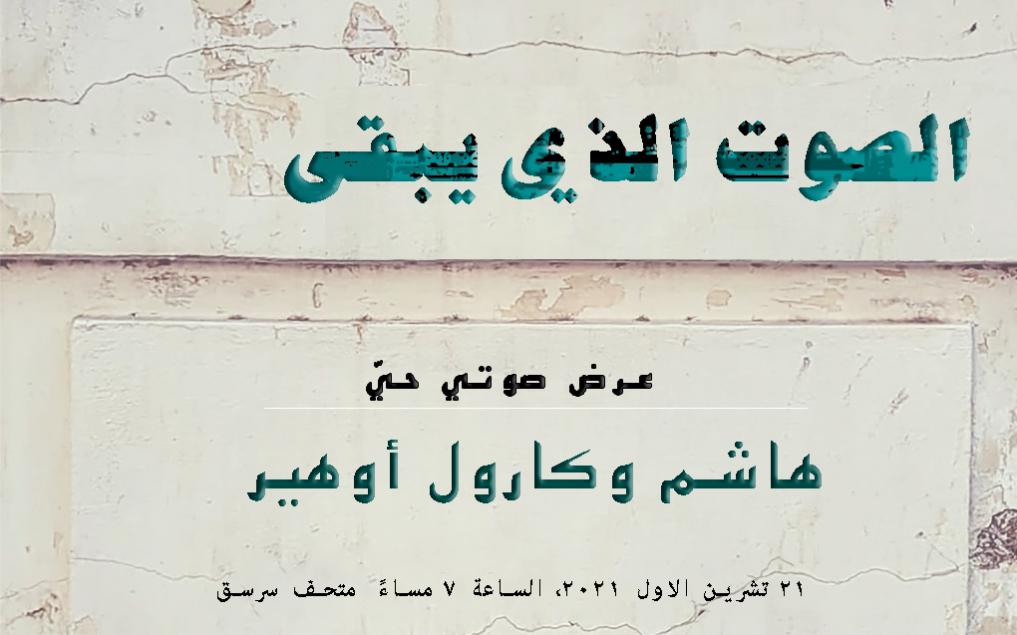 The Sound that Remains is a proposition by Qorras.

Beirut is the city of sounds; the sounds of endless traffic jams, generators, protest chants, loud songs playing in cars, the distant sounds of civilian aircrafts and war planes constantly hovering in the sky. Each one of us relates differently to this city and its sounds. But the sound we all heard on that particular day, remains stuck in our ears, eyes and the air that surrounds us. For many, that sound can be heard every time they close their eyes. Many anticipate it to fall upon them again as they go about their daily life. We want it gone, we want it to disappear; but it is the sound that remains.

In this live performance, Hashem and Carol OHair explore together - through poetry reading, music and sound design - the remaining sounds of Beirut and its people, with all of the heaviness and lightness that exists; and reflect on the possibility of creating new sound options that listeners can choose from to take home. Perhaps with much naivety, these alternative sounds might replace that dreadful sound!

Hashem is a poet, writer, editor and performer based in Beirut, with a particular interest in exploring themes of sexuality, identity and affect through various forms of language and expression. In 2019, Hashem was awarded the AFAC fund for performing arts for Night Prayer, a collaborative project with dancer Alexandre Paulikevitch. In 2021, Hashem was selected to join the ArtEvolution program by Goethe Institut in Lebanon, and the REVOLUTION Project in Italy.

Carol OHair (previously known as Elshaar) is a social psychologist, producer and  sound poet who uses words, music and politics to tell a story and provoke an emotion. Carol flirts with compositions and bends sounds to explore concepts of resistance, language, empathy, identities, and  nostalgia. By manipulating musical elements, Carol experiments with the ebb and flow of music theory, perception and embodied music cognition.

This event is part of the first edition of Power in the Collective, a new public program intiated by the Sursock Museum that recognizes the fundamental importance of groups and collectives in shaping, and producing situated knowledge both in theory and praxis. For each edition of the program, a local collective is invited to curate a series of events, spanning over a period of three months. The first cycle is proposed in collaboration with Qorras: https://www.qorras.com/

Qorras is a group working on collecting, producing, and disseminating knowledges related to issues of gender and sexuality. While based in Lebanon, its work addresses and connects with wider geographies spreading across the global south. By theorizing personal experiences and building on the work of others, Qorras aims to explore and experiment with methodologies for collaboratively producing and sharing knowledge in ways that serve its communities. Through its various projects, Qorras designs, coordinates, and implements accessible frameworks, methodologies and tools for individual and collective self-ethnography.

This event is made possible thanks to the support of the Lebanon Solidarity Fund launched by the Arab Fund for Arts and Culture – AFAC and Culture Resource (Al-Mawred Al-Thaqafy).