At the still point of the turning world, there is the dance

At the still point of the turning world, there is the dance 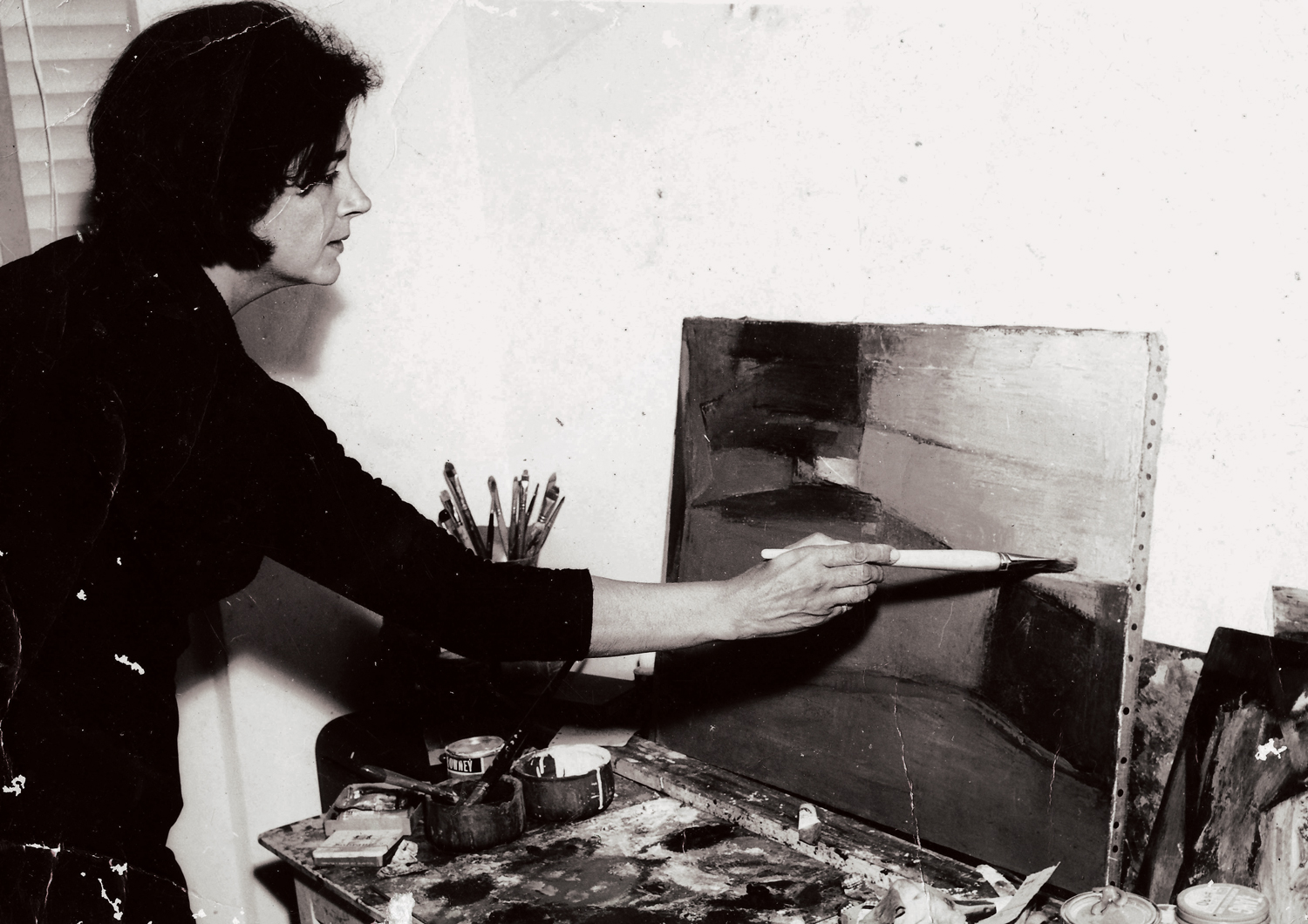 Helen Khal in her studio
Courtesy of MACAM 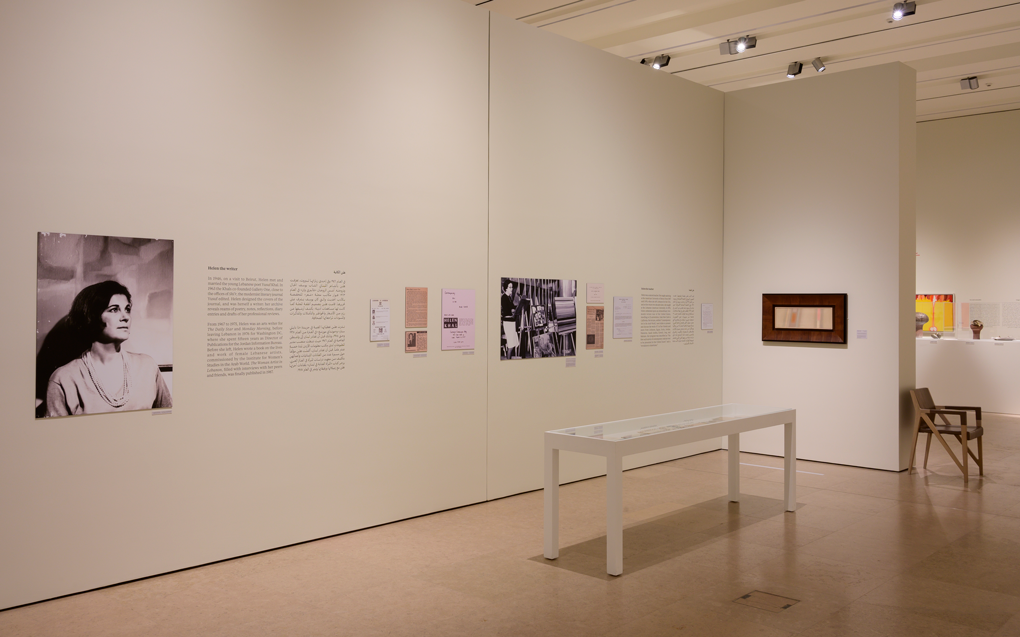 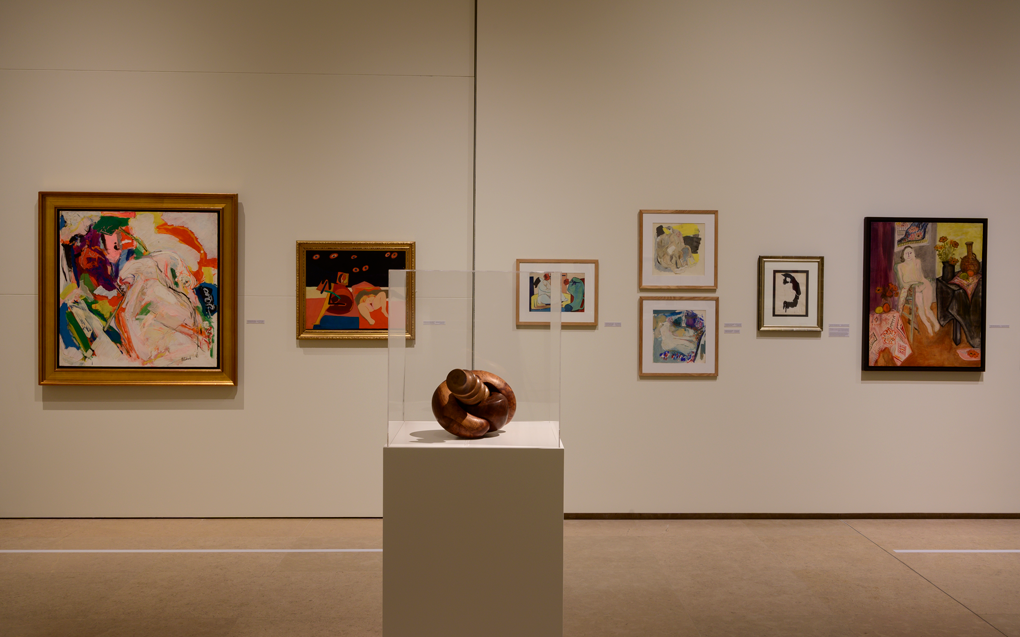 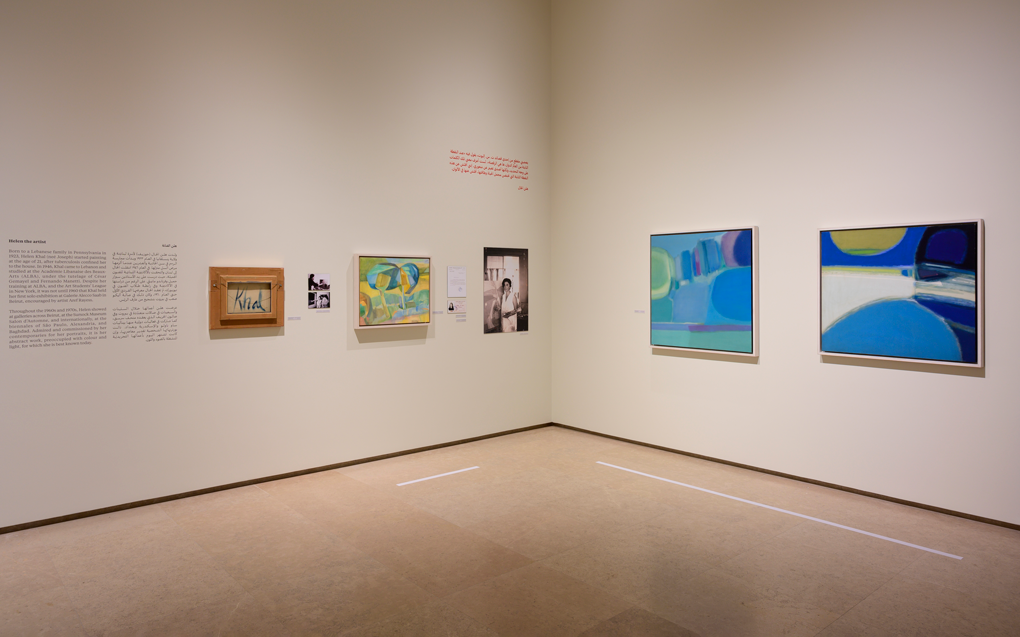 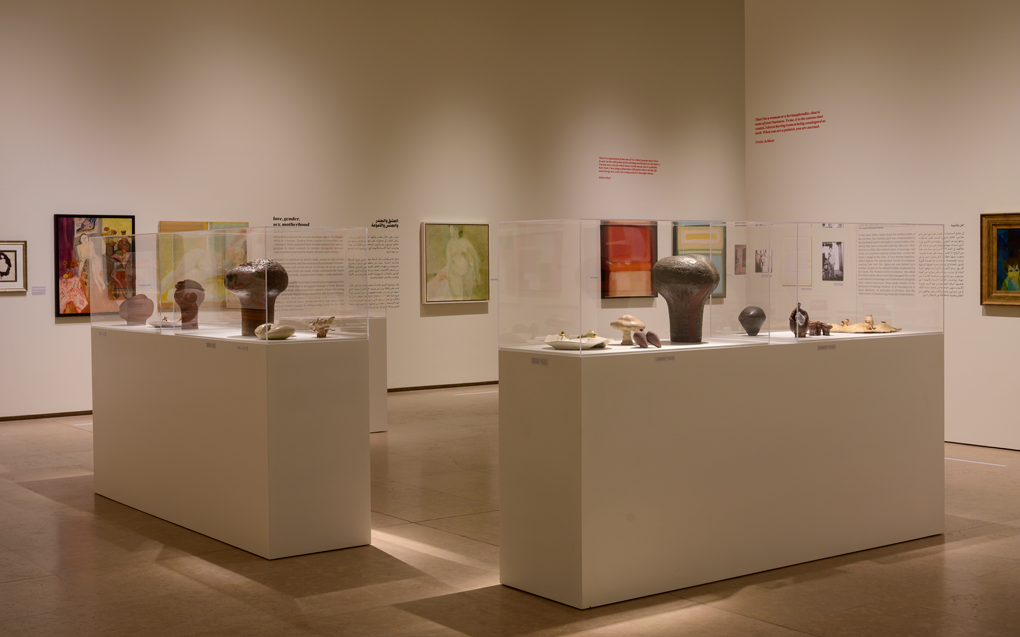 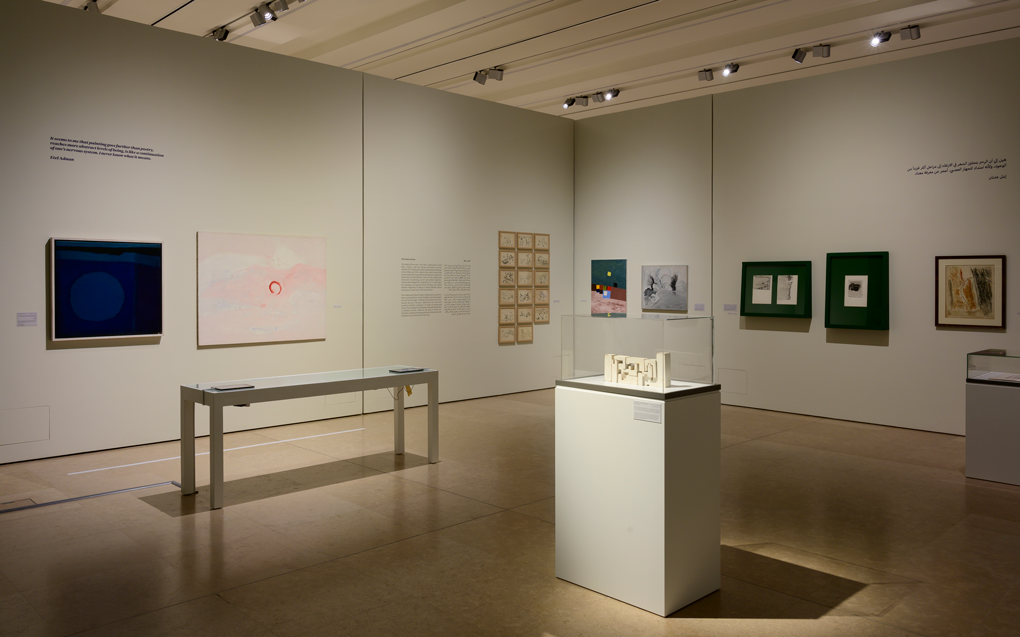 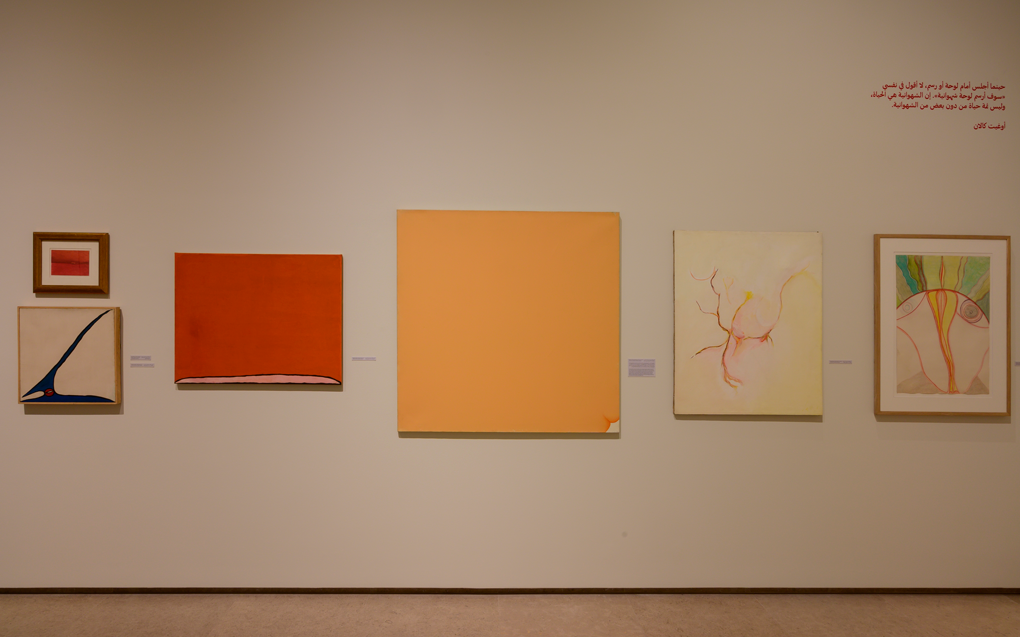 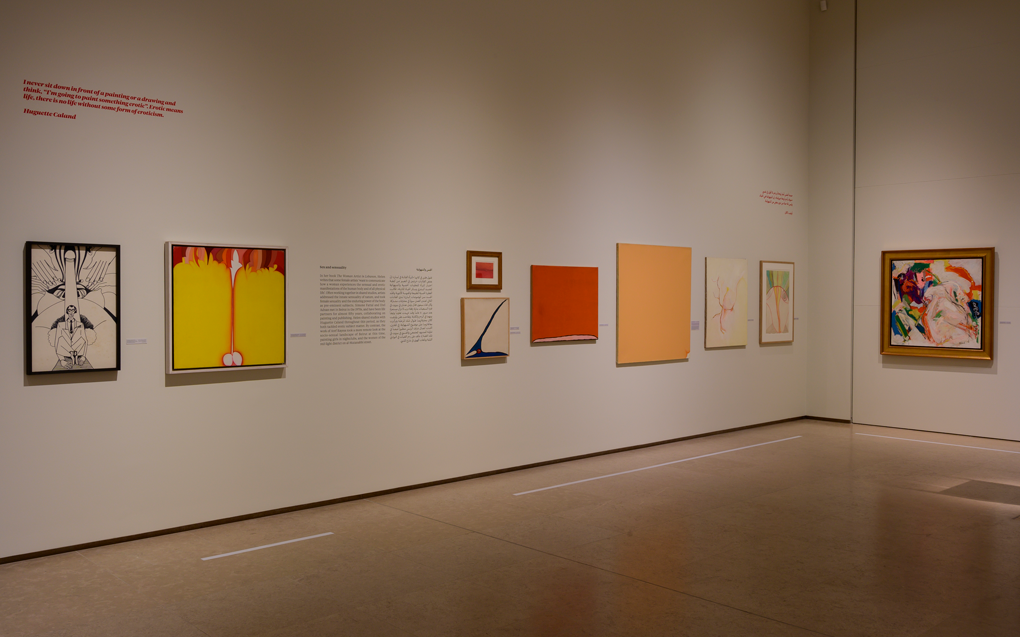 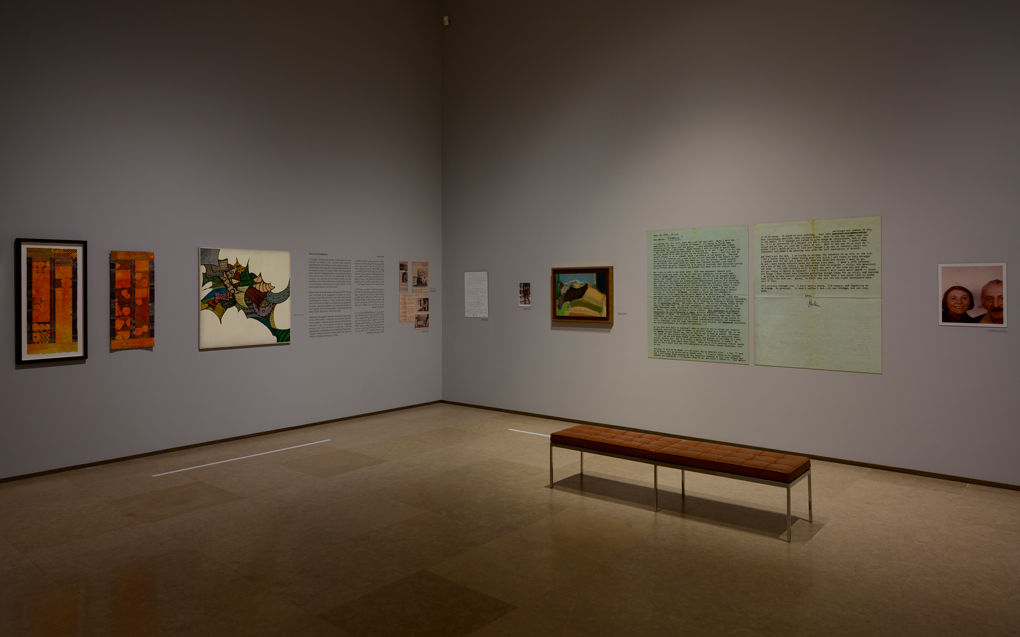 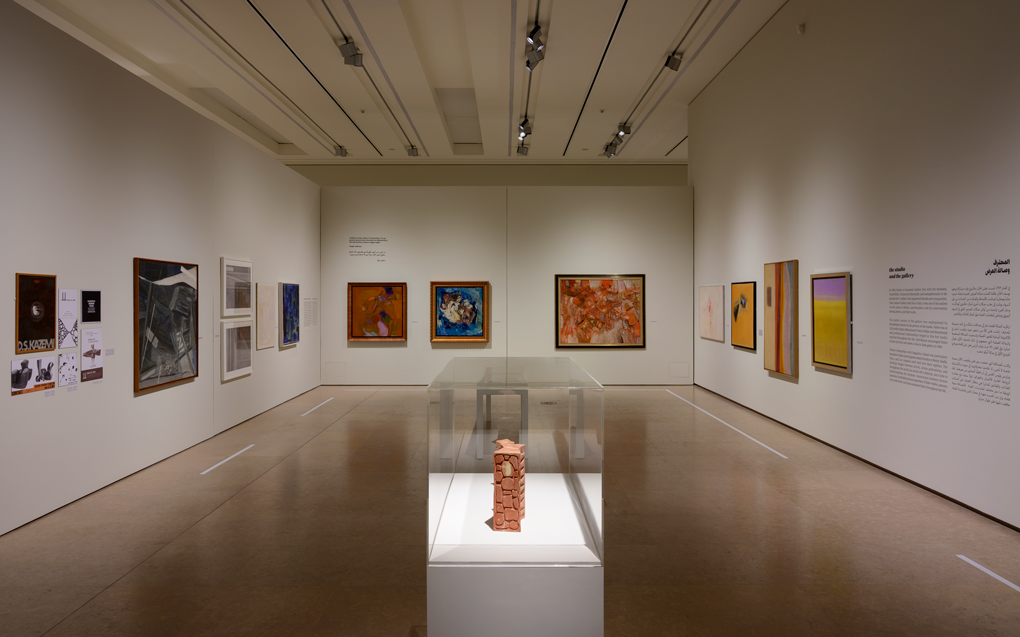 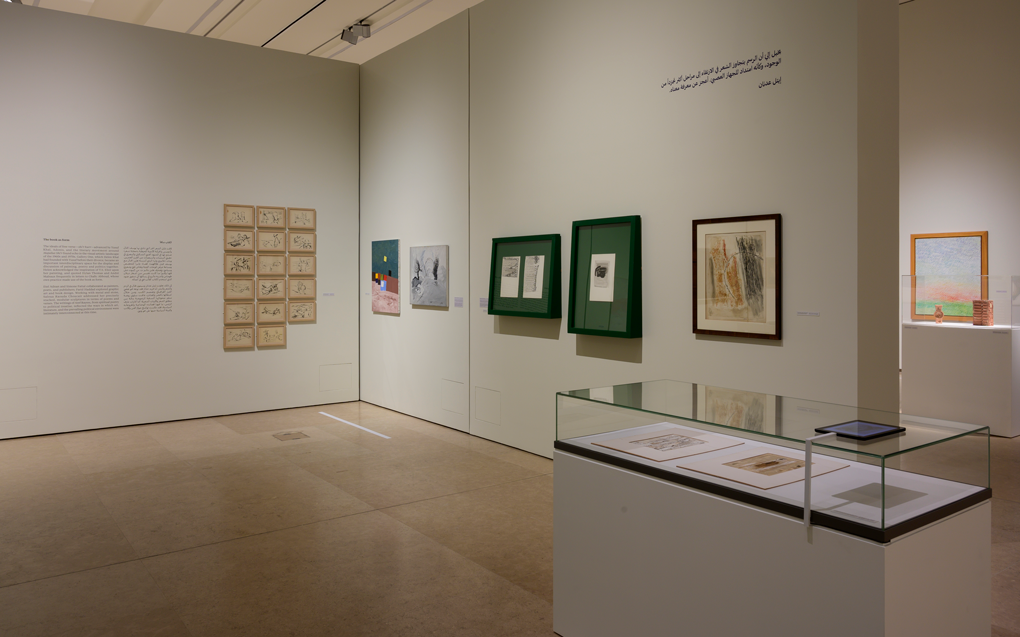 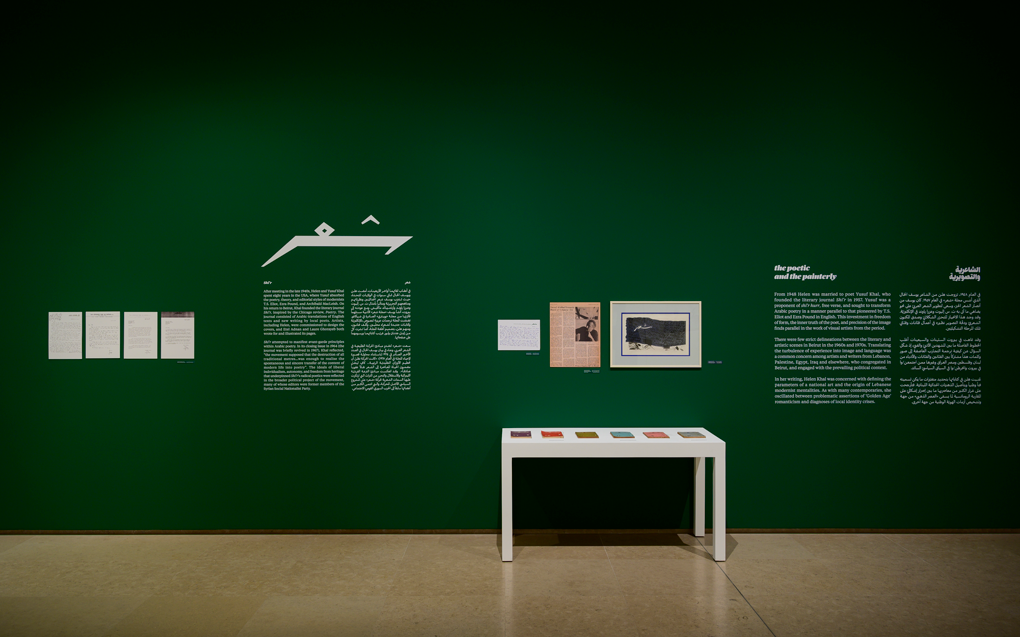 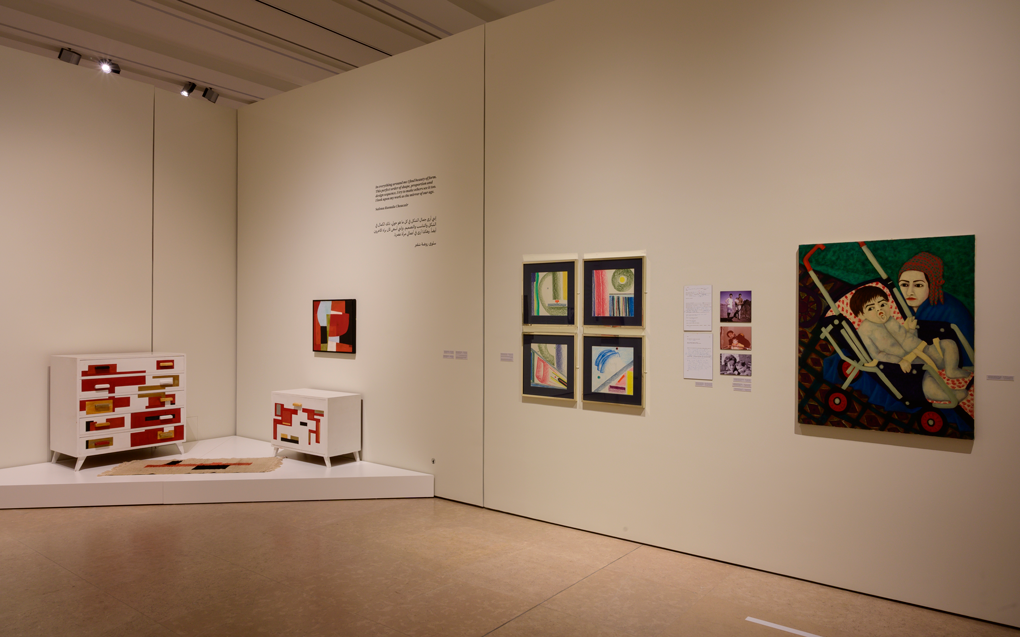 This exhibition is part of Home Works 8: A Forum on Cultural Practices.

Artist and writer Helen Khal (1923-2009) was at the centre of a fascinating generation of artists in Lebanon in the 1960s and 1970s. A prolific painter, co-founder of Gallery One, art critic for The Daily Star and Monday Morning, and author of a book on the female artist in Lebanon, Khal left a quiet mark on the institutional art landscape in Beirut, but has been underwritten in art history. Khal’s life and practice are the catalysts for exploring the work of those artists to whom she was close, in life and in art: Chafic Abboud, Etel Adnan, Huguette Caland, Saloua Raouda Choucair, and Aref Rayess among them.

This exhibition addresses themes of love, sex, and motherhood; the relationship between the visual art and literary landscape of 1960s and 1970s Beirut; and the galleries and studios in which public collaborations and private kinships were forged. Taking an intimate approach to a fabled period, At the still point of the turning world, there is the dance unfolds a rich picture of the friendships, connections, modes of exchange, common concerns, and differing approaches of some of the best-known and least-remembered artists of the mid-twentieth century in Lebanon.

Carla Chammas is an independent curator and advisor with a wealth of experience. She co-founded the CRG Gallery, New York in 1991 alongside Richard DesRoche and Glenn McMillan, hosting prominent artists from the Middle East to South America for twenty-seven years. Her career includes notable stints at Christies, New York (1984); Marisa del Re Gallery, Monte Carlo and New York (1985-88); and Hirschl and Adler Modern, New York (1988-1990). Chammas studied Art History and Political Science at Wheaton College, Massachusetts in 1978, and continued her education at the Sotheby’s Institute of Art, London.

Rachel Dedman (b. 1989, London) is a curator and writer based between Lebanon and the UK. Current and recent work includes exhibitions for Kettle’s Yard, Cambridge; the Whitworth Museum, Manchester; Beirut Art Fair; the Tricycle Theatre, London; and the Jerusalem Show IX. For five years, Rachel was curator at the Palestinian Museum, Ramallah, where she developed three exhibitions and authored two books on the politics of Palestinian embroidery, textiles, and dress. Rachel is co-editor of polycephaly.net, and one third of Radio Earth Hold, a collective supported by the Serpentine Galleries, commissioning radio broadcasts from artists. Rachel studied Art History at St John’s College, Oxford, and was the Von Clemm Postgraduate Scholar at Harvard University. She is currently a Forum Fellow at Art Dubai, and in 2019 takes up a new role as Curator of Contemporary Art from the Middle East at the Victoria and Albert Museum, London.

Chafic Abboud (b. 1926, Bikfaya, Lebanon) was a Lebanese painter. He studied at the Académie Libanaise des Beaux-Arts (ALBA), Beirut, and left for Paris in 1947. Although he spent most of his life in France, he is considered one of the most influential Lebanese artists of the twentieth century. His encounters with Jean Metzinger, Othon Friesz, Fernand Léger, and André Lhote led him to move from a Lebanese tradition of figurative and landscape painting to a colourful personal abstraction. Abboud showed interest in other media, including ceramics, terracotta, carpets, and lithography. Abboud's work has been widely recognized. He was part of Sajjil: A Century of Modern Art, the inauguration exhibition of Doha's Mathaf: Arab Museum of Modern Art. In 2011, the Institut du Monde Arabe, Paris showed a retrospective of his work. Another comprehensive exhibition curated by Claude Lemand, Nadine Begdache, and Saleh Barakat took place in May 2012 at Beirut Exhibition Center. Abboud died in 2004 in Paris.

Yvette Achkar (b. 1928, São Paulo) grew up in Lebanon. Achkar graduated from ALBA in 1957, where she studied under Italian painter Fernando Manetti and the French painter Georges Cyr. It was during an extended stay in Paris, on a scholarship from the French government, that her artistic career took hold. Upon her return to Lebanon, from 1966 to 1988, she taught painting at ALBA and at the Institute of Fine Arts and Architecture of  the Lebanese University. Yvette Achkar has participated in biennials in Baghdad, Alexandria, Paris, and São Paulo, and has been widely exhibited in solo and group exhibitions in Italy, the former Yugoslavia, Germany, and France.

Etel Adnan (b. 1925, Beirut) is of Greek and Syrian descent. Following her studies in Paris, New York, and Berkeley, Adnan lived in Sausalito, California, where she taught philosophy at the Dominican College of San Rafael (1958-1972); in Beirut, Lebanon, where she worked as cultural editor for the daily paper Al-Safa; and in Paris, France. In addition to her artistic work, she has published several collections of poetry, a novel, short stories, plays, and essays, and is regarded as one of the most important contemporary writers in the Arab world. Her work has been featured in several significant international surveys, including Documenta 13 (2012). Her work has also been shown as part of major exhibitions at institutions including the Punta della Dogana (2019); the Musée Yves Saint Laurent, Marrakech (2018); Zentrum Paul Klee, Bern (2018); MASS MoCA, North Adams, Massachusetts (2018); Institut du Monde Arabe, Paris (2017); Serpentine Gallery, London (2017); the Irish Museum of Modern Art, Dublin (2015); and the Museum der Moderne, Salzburg (2014).

Huguette Caland (b. 1931, Beirut) is known for her interdisciplinary practice traversing art, design, and fashion, and which addresses the female body and the politics of beauty and femininity. Caland took her first painting lessons at age 16 with Fernando Manetti, an Italian artist living in Lebanon, and studied Fine Arts at the American University of Beirut. In 1970, she moved to Paris, where she worked with other contemporary artists, and in 1987 relocated to Venice, California to establish her own studio. In 2013, she retired and returned to Lebanon. Recent exhibitions of Caland’s work have been presented at Tate St Ives, Cornwall, UK (2019); the Institute of Arab and Islamic Art, New York (2018); the 57th Venice Biennale (2017); Hammer Museum, Los Angeles (2016); Prospect.3, New Orleans Biennial (2014), Centre Georges Pompidou, Paris (2013); Institut du Monde Arabe, Paris (2012); Carnegie Art Museum, Oxnard, US (2012); Beirut Exhibition Center (2012); National Museum of Women in the Arts, Washington, DC (2010); and Sursock Museum, Beirut (2006).

Simone Fattal (b. 1942, Damascus) was raised in Lebanon, where she studied philosophy at the École des Lettres in Beirut. She then moved to Paris, where she continued her philosophical pursuits at the Sorbonne. In 1969, she returned to Beirut and began working as a visual artist, exhibiting her paintings locally until the start of the Lebanese civil war. In 1980, she settled in California, where she founded the Post-Apollo Press, a publishing house dedicated to innovative and experimental literary work. In 1988, she enrolled in a course at the Art Institute of San Francisco, which prompted a return to her artistic practice and a newfound dedication to sculpture and ceramics. Fattal currently lives in Paris. Recent exhibitions include Works and Days, MoMA PS1, New York (through September 2019); Luogo e segni, Punta della Dogana, Venice (through December 2019); Garden of Memory, the Musée Yves Saint Laurent, Marrakech (2018); L’homme qui fera pousser un homme nouveau, Rochechouart Departmental Museum of Contemporary Art, France (2017); and Simone Fattal, Sharjah Art Foundation (2016).

Farid Haddad (b. 1945, Beirut) is a painter and media artist. He graduated from the American University of Beirut in 1969 and holds an MFA in painting and drawing from the University of Wisconsin-Milwaukee. From the mid- to late 1970s, he taught drawing and painting at the University of Wisconsin-Milwaukee, and since 1979 has been on the faculty of the Department of Art and Art History at New England College in Henniker, New Hampshire. He is a former Fulbright Scholar (1972) and is a recipient of two Individual Artist Grants from the NH State Council on the Arts (1983 and 1984). His early works as a painter dealt with colour field painting, and in the early 1980s he turned to experimental abstraction. He has had solo exhibitions in Beirut, Kuwait City, Rome, New York, and Paris. Haddad has also participated in more than forty group shows in Europe, the Middle East, and North America.

Helen Khal (b. 1923, Pennsylvania) was an artist and writer of Lebanese descent, who began painting at the age of 21. In 1946, she started her studies at the Académie Libanaise des Beaux-Arts (ALBA), Beirut, and continued at the Art Students League, New York. In 1963, she established and directed Lebanon's first permanent art gallery, Gallery One. From 1966 until 1974, Khal was an art critic for Monday Morning and The Daily Star in Lebanon, and continued as a freelance arts writer and editor into the 2000s. She taught art at the American University of Beirut from 1967-1976. In the 1970s, Khal was commissioned by the Institute for Women’s Studies in the Arab World to conduct research on the work of female Lebanese artists, culminating in the publication of The Woman Artist in Lebanon in 1987. Helen Khal held her first individual exhibition in 1960 in Galerie Alecco Saab in Beirut, and had other solo shows at Galerie Trois Feuilles d'Or (1965), Galerie Manoug (1968), and Contact Art Gallery (1972, 1974 and 1975) in Beirut, and at the Bolivar Gallery (1975) in Kingston, Jamaica. Her work also appeared in biennials in Alexandria and São Paulo. She died in 2009 in Ajaltoun, Lebanon.

Saloua Raouda Choucair (b. 1916, Beirut) is a Lebanese painter. After attending the American University of Beirut, she moved to Paris in 1948 and studied at the École des Beaux-Arts, before returning to Lebanon. Her interlocking forms in painting and sculpture reflect her interests in Arabic architecture and language, alchemy and quantum physics, to suggest multiple interpellations of scale and perspective. Choucair was given a  retrospective at Beirut Exhibition Center (2011) and a solo exhibition at Tate Modern, London (2013). Other major exhibitions include Postwar: Art Between the Pacific and the Atlantic, 1945-1965, Haus der Kunst, Munich (2016); Sharjah Biennial 12 (2015); and Morgenröte, aurora borealis and Levantin: into your solar plexus, Kunsthalle Bern (2015). She has received numerous honours and awards, both in Lebanon and internationally, including an honorary doctorate from the American University of Beirut in 2014. She died in Beirut in 2017.

Aref Rayess  (b. 1928, Aley, Lebanon) was a self-taught artist who worked with a variety of different media. First exhibiting in 1948, Rayess spent many years travelling throughout Africa before moving to Paris to study at the Académie de la Grande Chaumière. He also spent time in Florence and Venezuela, and during the Lebanese civil war, in Algeria and Saudi Arabia. Rayess was a teacher of Fine Arts, working for many years at the Lebanese University, and was eventually appointed President of the Lebanese Association of Painters and Sculptors. Internationally, his individual exhibitions include the Poliani Gallery, Rome; Numero Gallery, Florence; D’Arcy Gallery, New York; Excelsior Gallery, Mexico; the Rodin Museum, Paris; a retrospective of his works from 1957-1968 at the National Museum of Damascus; Ornina Gallery, Damascus; and the Gallery Rasim, Algeria. Rayess died in 2005.

Dorothy Salhab Kazemi (b. 1942, Roumieh, Lebanon) studied Fine Arts at the Lebanese American University and American University of Beirut. She attended the School of Arts and Crafts in Copenhagen, Denmark, studying under renowned European ceramist Gutte Erikson. Between 1968 and 1970, she taught ceramics in Glasgow and then, between 1971 and 1982, at the Lebanese American University, assisting as a ceramics expert at the French-Syrian archaeological excavation site of Mayadin in Syria. Her main solo exhibitions took place in Glasgow, Beirut, Copenhagen, Damascus, and Paris. Salhab Kazemi was the pioneer of modern art ceramics in Lebanon.