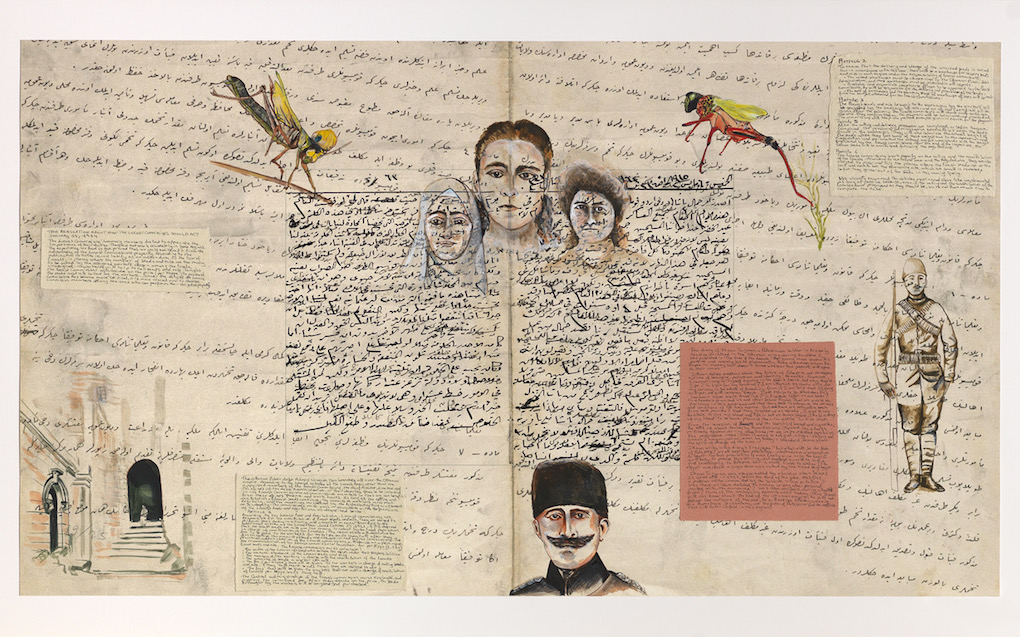 The conversation takes as a starting point Lamia Joreige’s body of work Uncertain Times produced following an investigation into the period spanning from 1913 to 1920 in Lebanon, Syria, and Palestine and which constituted a turning point in the history of the Middle East with the fall of the Ottoman Empire. Lamia Joreige would be in conversation with Turkish researcher and scholar Pelin Tan to talk about Uncertain Times and the use of contemporary artistic forms –such as assemblage, reconstitution, and text– to engage with historical research.

The conversation would be preceded by a short online intervention by Palestinian scholar Salim Tamari detailing the story of Ihsan Turjman, a Palestinian soldier in the Ottoman Army –and a central character in the waving of Uncertain Times– whose diary written during the Great War was rediscovered, translated and published in 2010.

Lamia Joreige is a visual artist and filmmaker. She uses archival documents and elements of fiction to reflect on history and its possible narration and on the relationship between individual stories and collective memory. Her practice, rooted in her country’s experience, explores the possibilities of representing the Lebanese wars and their aftermath, particularly in Beirut. Joreige’s works have been presented at the Istanbul, Venice and Sharjah Biennial; Centre Pompidou; Harvard University’s CCVA, the New Museum, the San Francisco Museum of Modern Art; Tate Modern, Tate Britain, Serpentine Gallery among others. Joreige was the recipient of a fellowship at Columbia University Institute of Ideas and Imagination in Paris (2021) and at the Radcliffe Institute for Advanced Study at Harvard University for the year 2016–2017. She is a co-founder and board member of Beirut Art Center, which she co-directed from 2009 to 2014.

Pelin Tan is a sociologist and art historian, a professor at Batman University (Turkey), a senior researcher at the Center for Arts, Design and Social Research (Boston), and a researcher at the Department of Architecture, School of Engineering, Thessaly University (Greece, 2021–2026). She is involved in ‘Urgent Pedagogies’ by IASPIS (Stockholm) and ‘Cosmological Gardens: Land, Cultivation, Care’ by CAD+SR (Spoleto). Tan has curated Gardentopia – Matera 2019 (Italy), and co-curated, with Liam Gillick, the I-DEA Archive by Matera Foundation. She currently curated a recent retrospective show of architect Didier F. Faustino at MAAT Lisbon (2023). Tan is the co-director of the short film Gılgamesh: She, Who Saw the Deep (2022). She is a lead author of ‘Towards an Urban Society’ (Cambridge Publ. 2018). She contributed to Climates: Architecture and The Planetary Imaginary (Columbia Univ., 2017), The Silent University: Toward-Transversal Pedagogy (Sternberg Press, 2016), Refugee Heritage (2021), Designing Modernity-The Arab Architecture (forthcoming 2022), Radical Pedagogies (MIT Press, 2022).

Salim Tamari is an Institute for Palestine (IPS) senior fellow and the former director of the IPS-affiliated Institute of Jerusalem Studies. He is the editor of Jerusalem Quarterly and Hawliyyat al Quds. He is professor of sociology at Birzeit University and an adjunct professor at the Center for Contemporary Arab Studies at Georgetown University. He has authored several works on urban culture, political sociology, biography and social history, and the social history of the Eastern Mediterranean. Recent publications include: Camera Palestina: Photography and the Displaced Histories of Palestine (2022), Year of the Locust: Palestine and Syria during WWI (UC Press, 2010) Ihsan's War: The Intimate Life of an Ottoman Soldier (IPS, Beirut, 2008); The Mountain Against the Sea (University of California Press, 2008); among others.